There’s an image going around that purports to explain the origin of the arabic numerals. It’s cute. It claims to show why the numerals that we use look the way that they do. Here it is: 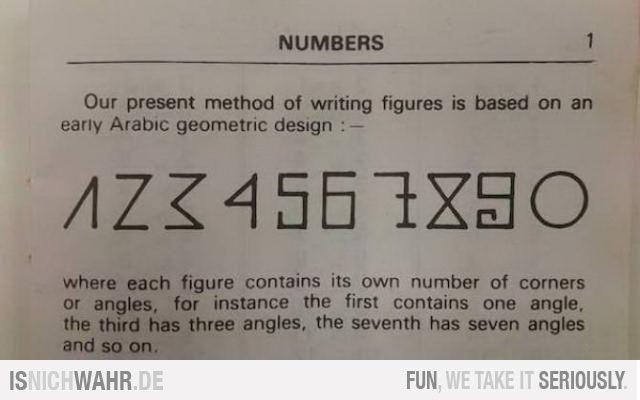 Look at the numerals in that figure. Just by looking at them, you can see quite a number of problems with them.

For a couple of obvious examples:

You don’t even need to notice stuff like that to see that this is rubbish. We actually know quite a lot about the history of arabic numeral notation. We know what the “original” arabic numerals looked like. For example, this wikipedia image shows the standard arabic numerals (this variant is properly called the Bakshali numerals) from around the second century BC:

It’s quite fascinating to study the origins of our numeric notation. It’s true that we – “we” meaning the scholarly tradition that grew out of Europe – learned the basic numeric notation from the Arabs. But they didn’t invent it – it predates them by a fair bit. The notation originally came from India, where Hindu scholars, who wrote in an alphabet derived from Sanskrit, used a sanskrit-based numeric notation called Brahmi numerals (which, in turn, were derived from an earlier notation, Karosthi numerals, which weren’t used quite like the modern numbers, so the Brahmi numerals are considered the earliest “true” arabic numeral.) That notation moved westward, and was adopted by the Persians, who spread it to the Arabs. As the arabs adopted it, they changed the shapes to work with their calligraphic notations, producing the Bakshali form.

In the Brahmi numerals, the numbers 1 through 4 are written in counting-based forms: one is written as one horizontal line; 2 as two lines; 3 as three lines. Four is written as a pair of crossed lines, giving four quadrants. 5 through 9 are written using sanskrit characters: their “original” form had nothing to do with counting angles or lines.

The real history of numerical notations is really interesting. It crosses through many different cultures, and the notations reform each time it migrates, keeping the same essential semantics, but making dramatic changes in the written forms of individual numerals. It’s so much more interesting – and the actual numeral forms are so much more beautiful – than you’d ever suspect from the nonsense of angle-counting.

22 thoughts on “Arabic numerals have nothing to do with angle counting!”