When people talk informally about topology, we always say that the basic idea of equivalence is that two spaces are equivalent if they can be bent, stretched, smushed, or twisted into each other, without tearing or gluing. A mug is the same shape as a donut, because you can make a donut out of clay, and then shape that donut into a mug without tearing, punching holes, or gluing pieces together. A sphere is the same shape as a cube, because if you’ve got a clay sphere, you can easily reshape it into a cube, and vice-versa.

Homeomorphism is the actual formal definition of that sense of equivalence. The intuition is fantastic – it’s one of the best informal description of a difficult formal concept that I know of in math! But it’s not ideal. WHen you take a formal idea and make it informal, you always lose some details.

The easiest way that I can think of to explain the product of two topological spaces is to say that it’s a way of combining the structures of the spaces by adding dimensions. For example, if you start with two spaces each of which is a line segment, the product of those two spaces is a square (or a circle, or an octagon, or …) You started with two one-dimensional spaces, and used them to create a new two-dimensional space. If you start with a circle and a line, the product is a cylinder.

Let’s start with a reminder of what the cartesian product of two sets is. Given a set

is defined as the set of all possible pairs

In category theory, we take the basic idea of the cartesian product, and extend it to a general product of different mathematical objects. It does this by using the idea of projections. In this model, instead of saying that the product of sets

is a set of pairs

, we can instead say that the product is a set

of objects, and two functions

. (To be complete, we’d need to add some conditions, but the idea should be clear from this much.) Given any object in the the product set

will give us the projection of that object onto

. This becomes more interesting when we consider sets of objects. The A-projection of a collection of points from the product set

is the shadow that those points cast onto the set A.

A topological product is easiest to understand with that categorical approach. The set of points in a product category

is the cartesian product of the sets of points in

and the sets of points in

. The trick, with topologies, is that you need to describe the topological structure of the product set: you need to be able to say what the neighorhoods are. There are lots of ways that you could define the neighborhoods of the product, but we define it as the topological space with the smallest collection of open-sets. To understand how we get that, the projections of the category theoretical approach make it much easier.

Informally, the neighborhoods in the product

are things that cast shadows into the topological spaces

which are neighborhoods in

Suppose we have topological spaces A and B. If

is the product topology

, then it has projection functions

is an open-set in 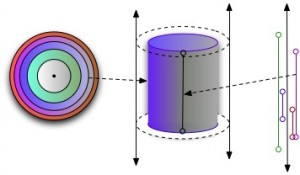 One interesting side-point here. One thing that we come across constantly in this kind of formal math is the axiom of choice. The AoC is an annoying bugger, because it varies from being obviously true to being obviously ridiculously false. Topological products is one of the places where it’s obviously true. The axiom choice is equivalent to the statement that given a collection of non-empty topological spaces, the product space is not empty. Obvious, right? But then look at the Banach-Tarski paradox.