So, I got in to work this morning, and saw a tweet with the following image: 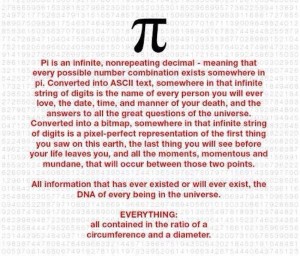 Pi is an infinite, non-repeating decimal – meaning that every possible number combination exists somewhere in pi. Converted into ASCII text, somewhere in that string of digits is the name of every person you will ever love, the date, time, and manner of your death, and the answers to all the great questions of the universe. Converted into a bitmap, somewhere in that infinite string of digits is a pixel-perfect representation of the first thing you saw on this earth, the last thing you will see before your life leaves you, and all the moments, momentous and mundane, that will occur between those points.

All information that has ever existed or will ever exist, the DNA of every being in the universe.

EVERYTHING: all contaned in the ratio of a circumference and a diameter.

Things like this, that abuse misunderstandings of math in the service of pseudo-mystical rubbish, annoy the crap out of me.

What it means to be irrational is simple, and it can be stated in two different ways:

There are many infinitely long sequences of digits. Some will eventually include every finite sequence of digits; some will not.

For a simple example of a sequence that will not contain every possible sequence of digits, consider 0.01011011101111011111… That is, the sequence of natural numbers written in unary form, separated by 0s. This will never include the number combination “2”. It will never contain the number sequence “4”. It will never even contain the digit sequence for four written in binary, because it will never contain a “1” followed by two “0”s. But it never repeats itself. It goes on and on forever, but it never starts repeating – it keeps adding new combinations that never existed before, in the form of longer and longer sequences of “1”s.

That’s the worst thing about the original quotation: it’s taking a common misunderstanding of infinity, and turning it into an implication that’s incorrect. The fact that something is infinitely long and non-repeating isn’t special: most numbers are infinitely long and non-repeating. It doesn’t imply that the number contains all information, because that’s not true. </p.

Hell, it isn’t even close to true. Here’s a simple piece of information that isn’t contained anywhere in π: the decimal representation of e. e is, like π, represented in decimal form as an infinitely long sequence of non-repeating digits. e and π are, in fact, deeply related, via Euler’s equation:

. But the digits of e never occur in π, because they can’t: in decimal form, they’re both different infinitely long sequences of digits, so one cannot be contained in the other.

Numbers like π and e are important, and absolutely fascinating. If you take the time to actually study them and understand them, they’re amazing. I’ve writted about both of them: π here and e here. People have spent their entire lives studying them and their properties, and they’re both interesting and important enough to deserve that degree of attention. We don’t need to make up unproven nonsense to make them interesting. We especially don’t need to make up nonsense that teaches people incorrect “fact” about how infinity works.

26 thoughts on “Infinite and Non-Repeating Does Not Mean Unstructured”