Paul Krugman has taken to calling certain kinds of economic ideas zombie economics, because no matter how many times they’re shown to be false, they just keep coming back from the dead. I certainly don’t have stature that compares in any way to Krugmant, but I’m still going to use his terminology for some bad math. There are some crackpot ideas that you just can’t kill.

For example, vortex math. I wrote about vortex math for the first time in 2012, again in early 2013, and again in late 2013. But like a zombie in a bad movie, it’s fans won’t let it stay dead. There must have been a discussion on some vortex-math fan forum recently, because over the last month, I’ve been getting comments on the old posts, and emails taking me to task for supposedly being unfair, closed-minded, ignorant, and generally a very nasty person.

Before I look at any of their criticisms, let’s start with a quick refresher. What is vortex math? 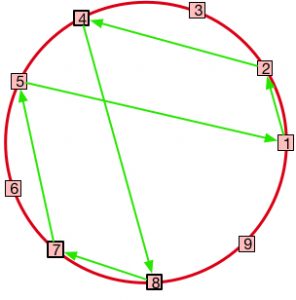 Take the numbers 1 through 9, and put them at equal distances around the perimeter of a circle. Draw an arrow from a number to its single-digit double. You end up with something that looks kinda-sorta like the infinity symbol. You can also fit those numbers onto the surface of a torus. 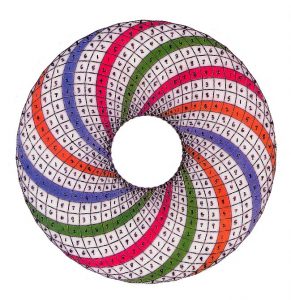 That’s really all there is to vortex math. This guy named Marco Rodin discovered that there’s a repeating pattern, and if you draw it on a circle, it looks kinda-like the infinity symbol, and that there must be something incredibly profound and important about it. Launching from there, he came up with numerous claims about what that means. According to vortex math, there’s something deeply significant about that pattern:

Let me show you an example, from one of Rodin’s followers, named Randy Powell.

I call my discovery the ABHA Torus. It is now the full completion of how to engineer Marko Rodin’s Vortex Based Mathematics. The ABHA Torus as I have discovered it is the true and perfect Torus and it has the ability to reveal in 3-D space any and all mathematical/geometric relationships possible allowing it to essentially accomplish any desired functional application in the world of technology. This is because the ABHA Torus provides us a mathematical framework where the true secrets of numbers (qualitative relationships based on angle and ratio) are revealed in fullness.

This is why I believe that the ABHA Torus as I have calculated is the most powerful mathematical tool in existence because it presents proof that numbers are not just flat imaginary things. To the contrary, numbers are stationary vector interstices that are real and exhibiting at all times spatial, temporal, and volumetric qualities. Being stationary means that they are fixed constants. In the ABHA Torus the numbers never move but the functions move through the numbers modeling vibration and the underlying fractal circuitry that natures uses to harness living energy.

The ABHA Torus as revealed by the Rodin/Powell solution displays a perfectly symmetrical spin array of numbers (revealing even prime number symmetry), a feat that has baffled countless scientists and mathematicians throughout the ages. It even uncovers the secret of bilateral symmetry as actually being the result of a diagonal motion along the surface and through the internal volume of the torus in an expanding and contracting polarized logarithmic spiral diamond grain reticulation pattern produced by the interplay of a previously unobserved Positive Polarity Energetic Emanation (so-called ‘dark’ or ‘zero-point’ energy) and a resulting Negative Polarity Back Draft Counter Space (gravity).

If experimentally proven correct such a model would for example replace the standard approach to toroidal coils used in energy production today by precisely defining all the proportional and angular relationships existent in a moving system and revealing not only the true pathway that all accelerated motion seeks (be it an electron around the nucleus of an atom or water flowing down a drain) but in addition revealing this heretofore unobserved, undefined point energetic source underlying all space-time, motion, and vibration.

Lots of impressive sounding words, strung together in profound sounding ways, but what does it mean? Sure, gravity is a “back draft” of an unobserved “positive polarity energetic emanatation”, and therefore we’ve unified dark energy and gravity, and unified all of the forces of our universe. That sounds terrific, except that it doesn’t mean anything! How can you test that? What evidence would be consistent with it? What evidence would be inconsistent with it? No one can answer those questions, because none of it means anything.

“positive polarity energetic emanation” is a bunch of gobbledegook wordage that doesn’t mean anything to anyone. I can’t refute the claim that gravity is a back-draft negative polarity energetic reaction to dark energy. I can’t support that claim, either. I can’t do much of anything with it, because Randy Powell hasn’t said anything meaningful. It’s vague and undefined in ways that make it impossible to reason about in any way.

And that’s the way that things go throughout all of vortex math. There’s this cute pattern, and it must mean something! Therefore… endless streams of words, without any actual mathematical, physical, or scientific argument.

There’s so much wrong with vortex math, but it all comes down to the fact that it takes some arbitrary artifacts of human culture, and assigns them deep, profound meaning for no reason.

If we plot the numbers on a circle, we get something that looks kind-of like an infinity symbol! What does that mean? Why should the infinity symbal (which was invented in the 17th century, and chosen because it looked sort of like a number, and sort-of like the last letter of the greek alphabet) have any intrinsic meaning to the universe?

So what’s in the recent flood of criticism from the vortex math guys?

On the first: Yeah, fine, I’m mean. But I get pretty pissed at seeing people get screwed over by charlatans. The vortex math guys use this stuff to take money from “investors” based on their claims about producing limitless free energy, UFO space drives, and cancer cures. This isn’t abstract: this kind of nonsense hurts people. They people who are pushing these scams deserve to be mocked, without mercy. They don’t deserve kindness or respect, and they’re not going to get it from me.

I’d love to be proved wrong on this. One of my daughter’s friends is currently dying of cancer. I’d give up nearly anything to be able to stop her, and other children like her, from dying an awful death. If the vortex math folks could do anything for this poor kid, I would gladly grovel and humiliate myself at their feet. I would dedicate the rest of my life to nothing but helping them in their work.

As for the Fibonacci series: well. It’s an interesting pattern. It does appear to show up in some interesting places in nature. But there are two really important differences.

34 thoughts on “Zombie Math in the Vortex”