The curried version isn’t actually a two parameter function. It’s a shorthand for:

So what does that have to do with category theory?

One of the ways that category theory applies to programming languages is that types and type theory turn out to be natural categories. Almost any programming language type system is a category. For example, the figure below shows a simple view of a programming language with the types Int, Bool, and Unit. Unit is the initial object, and so all of the primitive constants are defined with arrows from Unit. 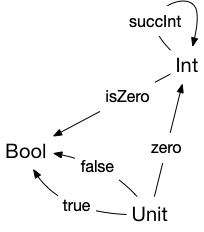 But how could we write the type of a function like our curried adder? It’s a function from a value to a function. The types in our language are objects in the category. So where’s the object that represents functions from A to B?

As we do often, we’ll start by thinking about some basic concepts from set theory, and then generalize them into categories and arrows. In set theory, we can define the set of functions from

– that is, as exponentiation of the range of the produced functions.

In terms of the category of sets, what that means is:

Like we saw with products, there’s a lot of potential exponential objects

which have the necessary product with

, and arrow from that product to

Let’s start putting that together. A potential exponential

is an object where the following product and arrow exist:

There’s an instance of that pattern for the real exponential:

In that category of potential exponentials of

, there’s an arrow from an object

if the following conditions hold in the base category:

It’s easiest to understand that by looking at what it means in Set:

An arrow in the category of potential products is a pair of two arrows in the base category:  one from

. Since the two arrows are deeply related (they’re one arrow in the category of potential exponentials), we’ll call them

. (Note that we’re not really taking the product of an arrow here: we haven’t talked about anything like taking products of arrows! All we’re doing is giving the arrow a name that helps us understand it. The name makes it clear that we’re not touching the right-hand component of the product.)

Since the exponential is the terminal, which means that that pair of curry arrows must exist for every potential exponential to the true exponential. So the exponential object is the unique (up to isomorphism) object for which the following is true:

Now, how does all this relate to what we understand as currying?

As I said before: not every category has a structure that can support exponentiation. The examples of this aren’t particularly easy to follow. The easiest one I’ve found is Top the category of topological spaces. In Top, the exponent doesn’t exist for many objects. Objects in Top are topological spaces, and arrows are continuous functions between them. For any two objects in Top, you can create the necessary objects for the exponential. But for many topological spaces, the required arrows don’t exist. The functions that they correspond to exist in Set, but they’re not continuous – and so they aren’t arrows in Top. (The strict requirement is that for an exponential

must be a locally compact Hausdorff space. What that means is well beyond the scope of this!)

If you have a category

, and for every pair of objects

, there exists an exponential object

, then we’ll say that

has exponentiation. Similarly, if for every pair of objects

, there exists a product object

, we say that the category has products.

There’s a special kind of category, called a cartesian closed category, which is a category  where:

That may seem like a very arbitrary set of rules: what’s so important about having all products, exponents, and a terminal object?

It means that we have a category which can model types, functions, and function application. Lambda calculus proves that that’s all you need to model computation. Closed cartesian categories are, basically, a formal model of a computing system! Any cartesian closed category is a model for a simply typed

-calculus is something known as the internal language of a cartesian closed category.

What “internal language” means formally is complicated, but in simple terms: you can take any computation in lambda calculus, and perform the computation by chasing arrows in a category diagram of a closed cartesian category that includes the values of that calculus. Alternatively, every computation step that you perform evaluating a

-calculus expression corresponds to an arrow in a CCC.

2 thoughts on “Category Theory Lesson 3: From Arrows to Lambda”